A timed speed event for sailplanes which is flown on a sloping site that provides sufficient lift and a predictable wind preferably perpendicular to the face of the slope. Such slopes are often coastal cliffs where an onshore sea breeze can be relied upon to provide the necessary slope lift. Each pilot flys 10 laps of a 150 Meter course and is timed over that distance. The top pilots in good conditions consistently fly the 10 laps in 30 to 40 seconds. The models used are very similar to those developed for F3B and often the same models are used for both disciplines. 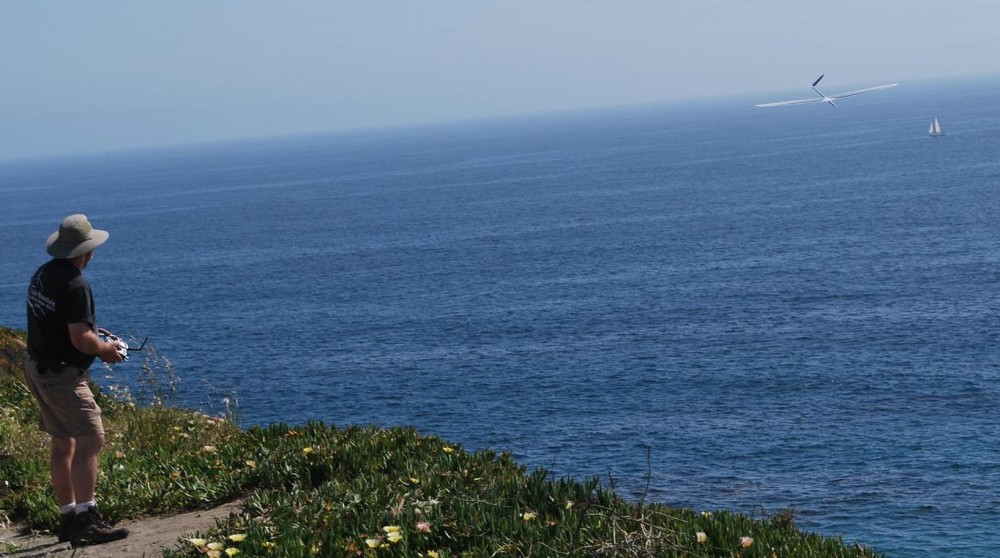 Below is the FAI event description for F3F racing.

This contest is a speed event for radio controlled slope gliders. A minimum of four rounds must be flown. The organiser shall run as many rounds as conditions and time permit.

The competitor may use three models in the contest. The competitor may combine the parts of the models between the rounds provided the resulting model used for flight conforms to the rules and that the parts have been checked before the start of the contest. Addition of ballast (which must be located internally in the model) and/or change of angles of setting are allowed. Variation of geometry
or area is allowed only if it is actuated at distance by radio control.

The competitor must operate his radio equipment personally. Each competitor is permitted one helper. The helper is only to assist and advise the competitor until the model is passing Base A for the first time and after the timed flight is completed.

The pilots perspective on a slope during F3F competition is often from above where he is looking down at his aircraft.

There is an attempt when the model has left the hands of the competitor or his helper.

The competitor has one attempt on each flight. An attempt can be repeated if:

a) the competitor used a model not conforming to FAI rules;
b) the model loses any part while airborne;
c) the helper advises the competitor during the timed flight;
d) the model is controlled by anyone other than the competitor;
e) the flight is not carried through;
f) the model lands outside the assigned landing area;
g) the model is not launched within 30 seconds from the moment the starting order is given.

h) the model (i.e. the centre of gravity) fails to pass above a horizontal plane, level
with the starting area, within five seconds of exiting the course.

The flights are to be performed round by round. The starting order is settled by draw in accordance with the radio frequencies used.

If possible, the starting area, including the audio system, shall be situated in the middle of the course (equal distance from Base A and Base B). The time from launch to the moment the model enters the speed course must not exceed thirty seconds.

The diving turn at exit of Base B is typical of how F3F pilots execute the turns with sustained energy.

The flying task is to fly 10 legs on a closed speed course of 100 metres in the shortest possible time from the moment the model first crosses Base A in the direction of Base B. If some irremovable obstacles do not allow 100 m the course may be shorter but not less then 80 m. This exception does not apply for world or continental championships.

The speed course is laid out along the edge of the slope and is marked at both ends with two clearly visible flags. The organiser must ensure that the two turning planes are mutually parallel and perpendicular to the slope. Depending on the circumstances, the two planes are marked respectively Base A and Base B. Base A is the official starting plane. At Base A and Base B, an Official announces the passing of the model (i.e. the fuselage nose of the model) with a sound
signal when the model is flying out of the speed course. Furthermore, in the case of Base A, a signal announces the first time the model is crossing Base A in the direction of Base B.

The organiser must clearly mark a safety line representing a vertical plane which separates the speed course from the area where judges, other officials, competitors and spectators stay. Crossing the safety line by any part of the model aircraft during the measured flight will be penalised by 100 points subtracted from the sum after conversion, the penalty not being discarded with the result of the round. The organiser must appoint one judge to observe, using an optical
sighting device, any crossing of the safety line.

The flights are judged by two judges who do not have to be the same for all competitors.
The judges’ task is to control that the flights are performed according to the rules, to be time keepers and to ensure that the right distance is flown.

The result of the flight is stated as the time in seconds and hundredths of seconds obtained by each competitor. For the purpose of calculating the result of the round, the competitor’s result is converted this way:

where PW is the best result in the round, and P is the competitor’s result.

Most efficient planform for F3F models is the VTail and most designs also use a 2 piece wing.

The competition must be held at a site which is suitable for slope soaring. When marking the starting and landing areas and the turning planes, the organiser must take into account the configuration of the terrain and the wind direction.

Any changes in the flight and landing areas may be made only between flight rounds.

A round in progress must temporarily be interrupted if:-

If these conditions arise during the flight the competitor is entitled to a re-flight.

A round in progress is to be cancelled if:

a) the interruption lasts more than thirty minutes;
b) fewer than 50% of the competitors have been able to perform the task caused by marginal conditions. Without the condition “constantly” (i.e. 20 seconds) have been met and thus caused re-flights.