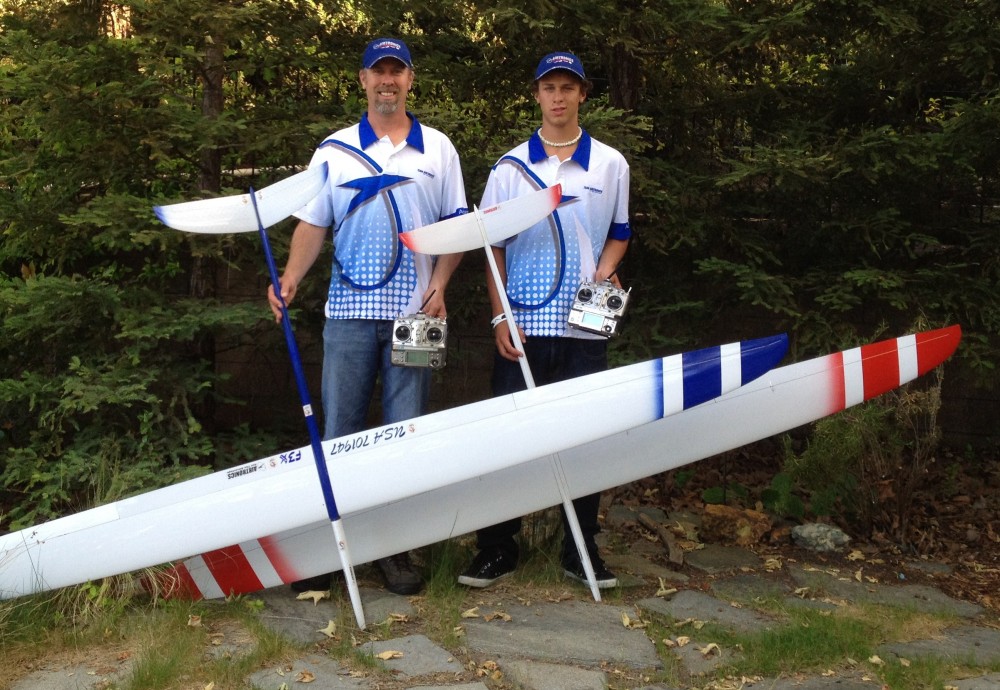 Kyle Paulson – Pilot
Kyle lives in Westlake Village, California. He is married to his wife Mary Pat and together they have 4 children; Courtney, Christian, Kyler and Koby. Kyle has been a SoCal resident most of his life and plans to stay for years to come. He and his family love to camp and travel, many times going to locations and events centered on soaring competitions and fly sites. Kyler at 16 years old, the third child, flies and competes with his father Kyle and has been known to “put the hurt on the Old Guys” at times. This Year Kyler will be going with his father to WC. Kyle and Kyler do most of their flying together and are “two-peas-in-a-pod”, “like father like son”. Look out for Kyler in the years to come! Koby his 4th child is now flying as well and coming along quite rapidly.
Competition is the big draw for Kyle in all types of soaring. His specialty has been F3F and he is now branching out to F3B, Thermal Duration and F3K. He flies to compete and does well under pressure. He has been flying RC for 10 years and loves it more than ever. Some of his accomplishments include: 2 time F3F Viking Team member placing 10th in 2006 in Scotland and 5th at the 2008 Viking Race in Slovakia. He is currently the Southern California F3F Point Series Champion, 3 consecutive years in a row, 2006, 2007 and 2008. He also is the Point Series Champion of the 2008 F3F So Cal Cup. In 2011 Kyle placed 4th at the F3B World Championships in China and also placed 3rd at the German Open racing F3F. Kyle has also held multiple World Records, Dynamic Soaring. His most recent, although no longer the record, was DS’ing at Parker Mtn. at 302mph, caught on film and by radar gun.
Kyle is currently flying the Freestyler 4 and loves them for both F3F and F3B. For Thermal Duration he flies the Aspire and for F3K, the Aspirin. Again he can’t say enough good things about these models. Kyle is an Airtronics Factory Pilot and uses the SD-10G.

Kyler Paulson – Junior Pilot
Kyler Paulson lives in Westlake Village, California and attends Agoura High School. He is currently 16 years old and will be entering his Junior Year at Agoura High. Kyler participates in track at Agoura and was part of the 4 x 4 relay team that competed at the CIF level this past season. He also runs the 100 and 200 m events. In addition Kyler is on the leadership team of FCA (Fellowship of Christian Athletes) at Agoura High. Kyler loves to skateboard and hang out with friends when he isn’t flying the slopes of Southern California.
Kyler competes with his dad Kyle flying F3F and has some impressive accomplishments at only 16 years old! He has been flying since he was 9 years old and was taught by his dad Kyle. In 2006 he went to the Viking Race in Scotland as a spectator with his dad. Well, he was so interested in the competition watching intently the whole time, the contest organizer decided to give Kyler a special award… “The 2006 Viking Race Best Spectator Award”. Kyler went home from the Viking Race eager to start racing F3F with his dad. Just 2 years later, Kyler went back to the 2008 Viking Race in Slovakia to place 3rd as a Junior Pilot representing the USA! That same year he placed 5th amongst the senior pilots in the SoCal Slope Racing F3F Points Series. The following years were more of the same; 2009 he placed 3rd, 2010 he placed 5th and in 2011 he placed 4th in the SoCal Slope Racing F3F Point Series. Over these years many times placing 2nd, and 3rd place and at one F3F slope race in 2010, he took his first win racing against the best F3F pilots in Southern California, winning his first F3F event!
Kyler’s most impressive performance was going to the 2011 German Open. The best F3F pilots in the world were there…..all men except Kyler! He placed 7th over all! He again won a special award because the contest director was so impressed with his skills at only 15 years of age. So, Kyler, going to the 2012 World Championships as the USA Junior Pilot, represents high hopes for America.
Because of Kylers accomplishments, he has now acquired his first official sponsor. He is a full Factory Sponsored Pilot flying for Team Airtronics. Kyler has always used AirTronics Servos and the SD-10G Transmitter because he, (like his dad,) believes in the product and its performance. Kyler flies the Freestyler like his dad. He loves it and knows how to make it go fast! Through it all Kyler has remained humble and always has a great attitude.
Wish Kyler luck at the WC! 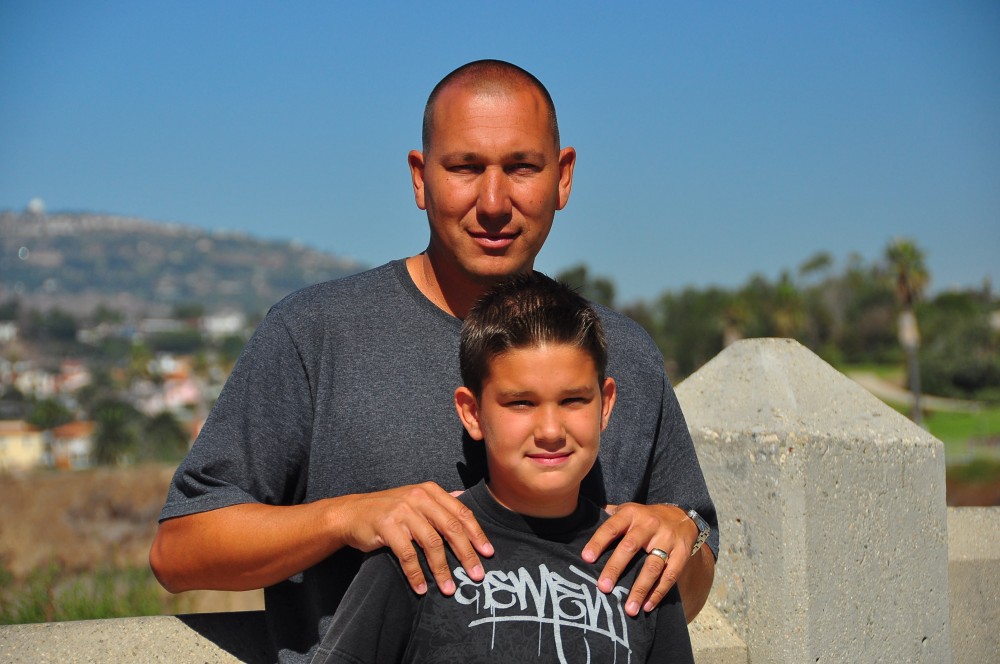 Brandon with his youngest son Brian

Brandon Monte – Pilot
Brandon began flying RC in the mid 80’s. He was first introduced to the world of RC mainly flying PSS planes at Point Fermin in San Pedro, CA. He continued flying until the early 90’s when life took over and then took a break until early 2004 when he dove back into the world of PSS. Shortly thereafter he was introduced to F3F racing in 2006 and began competing on the local Southern California circuit with SCSR (Southern California Slope Racing.) He spent the next 5 years learning plane setup, flying styles, and energy management. He quickly advanced through the ranks and developed into one of the premier F3F pilots in the US. Along the way Brandon won several SCSR F3F competitions and after years of hard work has now fulfilled one of his dreams to make the US Team and compete internationally representing the USA. This will be his first trip across the pond to compete in a World Championship event. He currently holds the Presidents position for SCSR.

Brandon currently resides near Corona, Ca. and has a lovely wife Dawn of 18 years and 2 sons Trevor and Brian ages 15 and 12. Brian the youngest loves to hang out with dad at the slope and run the CD chair. He does a great job and knows how to keep a race running at such a young age! Brandon currently runs a local Real Estate business and enjoys helping others find their dream homes! He is certified in distressed properties and specializes in assisting distressed homeowners. He also enjoys Golf in his spare time and other outdoor activities. 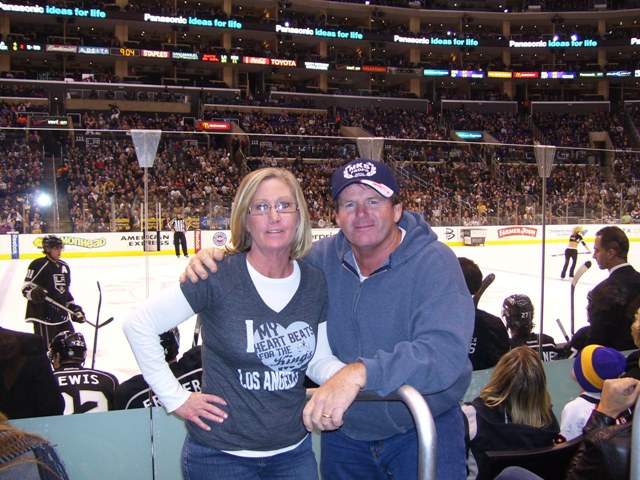 Warren with his wife Elaine at another love of theirs – An Ice Hockey game!

Warren has been flying competitively since 2004 and served as President of Southern California Slope Racing (SCSR).
He was on the 2008 USA Viking team which finished 8th and has been the winner of SCSR Unlimited MOM in 2005, and 2007-2010. Warren also competes in thermal duration events held locally.

Warren flys a Pike Precision for F3F racing, and an Xplorer for Thermal Duration supplied by Soaring USA. Warren is an MKS Servos and Soaring USA Sponsored Pilot and uses Airtronics SD10G transmitter and receivers.