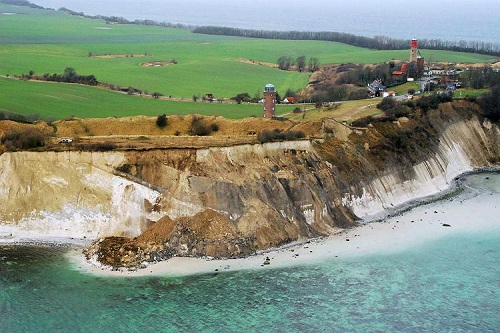 Oct 5 – 13, 2012.
Cape Arkona – Germany
N 54°40’20.90″
E 13°24’50.74″
The area at Kap Arkona on the Island of Rügen is one of the best known and most appreciated F3F areas worldwide. Slopes for all wind directions are available and the location has the highest probability for wind within Germany. Based on the experience of the organizer, the month of October has proven to be particularly well suited.

The slopes are exclusively cliff lines directly facing the Baltic Sea. Therefore relatively even lift conditions without significant thermal influence are guaranteed. The competition is supported by the local authorities and the hosting municipality of Putgarten, so during the period of the World Championship unrestricted flying at the otherwise closed ridges is permitted.

The German Aero Club (DAeC) hosts the International German Open at Rügen since 2001, with participants from all over the world. The Viking Race 2004 at the same location is still considered as one of the most successful events ever in the history of the former unofficial World championship of the former provisional FAI class F3F. Almost all potential pilots of the upcoming world championships have participated in competitions hosted here during the last years.

Also the desire to promote the F3F class to an official one, with world championship status, roots back to the multi-national discussion rounds held at Kap Arkona. Furthermore, the team of organizers, officials and judges can refer to the successful hosting of six large international FAI competitions and the Viking Race 2004.

The Island of Rügen

The Island of Rügen is the largest German island and excels by nature and landscapes of great diversity. Main source of income is the tourism, which has a long tradition. Famous beach resorts with the characteristic seaside-resort architecture of the 19th century characterize the island.

But also dreamy, almost lonesome fisher villages belong to the island’s scenery. The unique interplay of open sea and Bodden landscapes gives Rügen its unique appearance. It has special reputation as a recreational area. As it is furthermore one of the windiest regions of Germany it has developed to an El Dorado for sailors and surfers – and last but not least the model slope soaring community.

Timetable for the Event

Friday October 5th – Arrival
09:00–18:00 Registration and processing in the headquarters

19:00 Opening ceremony with reception of all teams in front
of the festively illuminated historic lighthouses at Kap Arkona

20:00 Opening Dinner-Banquet and public Concert from Classic to Jazz with
the Philharmonic Brass Quintett of the Semper-Opera Dresden
“A musical walk around the world”